I’m a happy and house proud renter, most of the time.

You’ll never see at Today Tonight special about ‘horror tenants’ featuring me – well, actually I hope you never see any Today Tonight or A Current Affair stories, because those shows are utterly bogus advertorials and fear mongering outlets, masquerading as ‘current affairs’ shows. I call bullshit on those. Utter bullshit… but, that’s not what I want to talk about today, dear reader.

I’ve been renting since I was about 19, so I’ve had my fair share of successes and abject failures. The very first place I moved into was a house in Burwood, where I lived with two young gents who hailed from Wangaratta (that’s smack bang in the middle-ish of country Victoria for those unfamiliar with local geography). I found their ad for a third roomie via a Uniting Church service – it wasn’t a website, I had to call them up – this was back in the dark ages before the internet, when people had record players and used pay phones.

So, on my first day there, the lads took me out to the low side fence and shared with me the secret to living together, happily ever after. I can’t even remember their names, so let’s call them Billy Bob and Jimmy John shall we. “See that?” queried Jimmy John, pointing to the footpath, “that’s Burwood”. Ah! Genius. “But see this?”, drawled Billy Bob, pointing to our scruffy lawn “This is Wang”. Apparently we were living on the edge of some kind of space-time-geographic continuum where suburban Melbourne merged with country Victoria, by sheer force of will.

I didn’t live there for long. All I really remember is we ate a lot of snags, and Jimmy John used to ride his bicycle from Burwood to the Mornington Peninsula and back every Saturday morning, then crack open a beer upon his arrival home and lay sweaty and spent on the couch for a while.

And that house in Burwang (?) is where I discovered that Rick Astley and Kylie Minogue were actually THE SAME PERSON. I bought the single of ‘I Should Be So Lucky’ and when I popped it on the record player, the voice that came out was dead set Rick. I had it on the wrong speed and took great joy in playing it at both speeds for visitors – Rick / Kylie / Rick / Kylie. Mind blowing stuff.

Oh, record players are old fashioned machines where you put a big kind of vinyl CD on a turntable and then you pop the needle carefully on the outside of the first groove and the record spins right round baby, right round. If that’s not crystal clear, then feel free to hit up Google!

So I ventured into renting in Burwang, and since then I have lived in Wheelers Hill and Mulgrave and Highett and Mordialloc. I have lived in St Kilda and Elsternwick, in Blackburn and Blackburn North. Heck, I lived in so many places in the first two years of being free of the familial nest, that I probably couldn’t recount them all in order if I was offered $10,000. Way to go, memory!

I have lived with families, with friends, with siblings, with married peeps and singletons. I went back home for a few stints early on, and I really enjoyed making wherever I was a home. I don’t need to be shackled with massive debt to create a home. I’m a nester.

There was a short period where I moved in with a girl I didn’t really know, who had decided to quit her job and study full time. To pay her hefty Lilydale mega-house mortgage, she took in a couple of renters.

She did NOT want to share her home, and I think I was there for less than a month. I committed unforgivable sins like moving blankets from one shelf to another in the linen press, and I didn’t worship her small yappy dog sufficiently (that’s never going to happen pet lovers – deal with it).

For the past 10 years or so I’ve lived in a rickety weatherboard house in the south-east suburbs of Melbourne. I moved there and shared with someone from uni for the first few years. It was mostly fine, but there were moments that I felt a bit Single White Female-d upon, with lots of hanging around at the doorway when I had my boyfriend over, or what I felt was overstepping the bounds of sharing a house with someone. Here’s a tip – if we’re not actually close friends, and you come and ask me for a hug when you’re having a crap day but being very uncommunicative about it, and it makes me feel uncomfortable, I might just say no.

I’m a girl that likes my space! And somewhere along the line, I learned to say no with ease. Oops!

Soon enough, she moved out and I took the opportunity to move from the bigger place we shared to the little front unit. It was the easiest move of all time, thanks to the connecting door between the two units. (I’ll have to write a whole other post about the home’s dodgy history, and the number of doors. Crazy stuff.)

The house has changed hands since I moved there, and the new owner is a real novice at being a landlord. They tried to crank up the rent by hundreds and hundreds of dollars on me, before he even legally owned the property. I used that handy word again… no. That’s illegal fella. Good try.

He mustn’t have bothered looking too carefully when he bought it, because the few times he’s been over he often remarks that it doesn’t look familiar or he doesn’t remember that it’s a one bedroom place. It’s what you’d kindly call a ‘character’ property, and being weatherboard, it is really starting to show the years. He seems baffled by the notion that he should take responsibility for any maintenance issues. Guess what pal? That’s part of the deal with property investing. Your tenants pay your mortgage, and you maintain our homes (your investment). Capiche?

Ten months ago I mentioned that the trellis fence between my unit and the back unit was falling over. It is old and busted and needs replacing. TEN MONTHS AGO. I have spoken to the agent in person about this, he’s seen the state of the fence, he’s taken photographs of it and he craftily ignored my emails for most of 2014. So I emailed him again recently. I used CAPITAL LETTERS.

Today I got a response from the agent asking me if I could measure up the fence, to save him having to come over and do it himself.

Um, hello, aren’t you getting a percentage of the rent to, what do you call it, manage the listing for the owner? “BYO measuring tape bucko”, I thought, and I politely replied to his email, and used that oh so easy to say word, no.

No, I will not do your job, and the landlord’s job for you.

No, I will not cower and just ‘suck it up’ because I’m ‘just renting’.

This is my home. I pay for it. I live in it. I take care of it and make it look cosy and welcoming.

I’m not measuring your busted fence. Maybe I should give Today Tonight a call….

But, the important part is, even with this frustrations of a not very switched on landlord, I love my home.

I’ve had some amazing neighbours here in wobbly weatherboard land. I’ve made friends and known great kindness here. I’ve had people over to celebrate big milestones – I’ve cooked engagement meals and met some of my girlfriends’ future husbands here. I’ve watched favourite TV shows and baked for people in this weatherboard house. This very blog started in my living room. I couldn’t love it more if it was mine on paper.

This ol’ house may have a fence that’s falling down (and rotting gutters, and no insulation, and creaky floors, and seriously dodgy leaky walls), but she’s strong in what homes are really made of – warmth, welcome, and a refuge at the end of the day.

Yours in real estate heaven,

Here’s my busted fence, the neighbour’s unkempt jasmine is doing a mighty fine job of both breaking and holding it up, don’t you think? 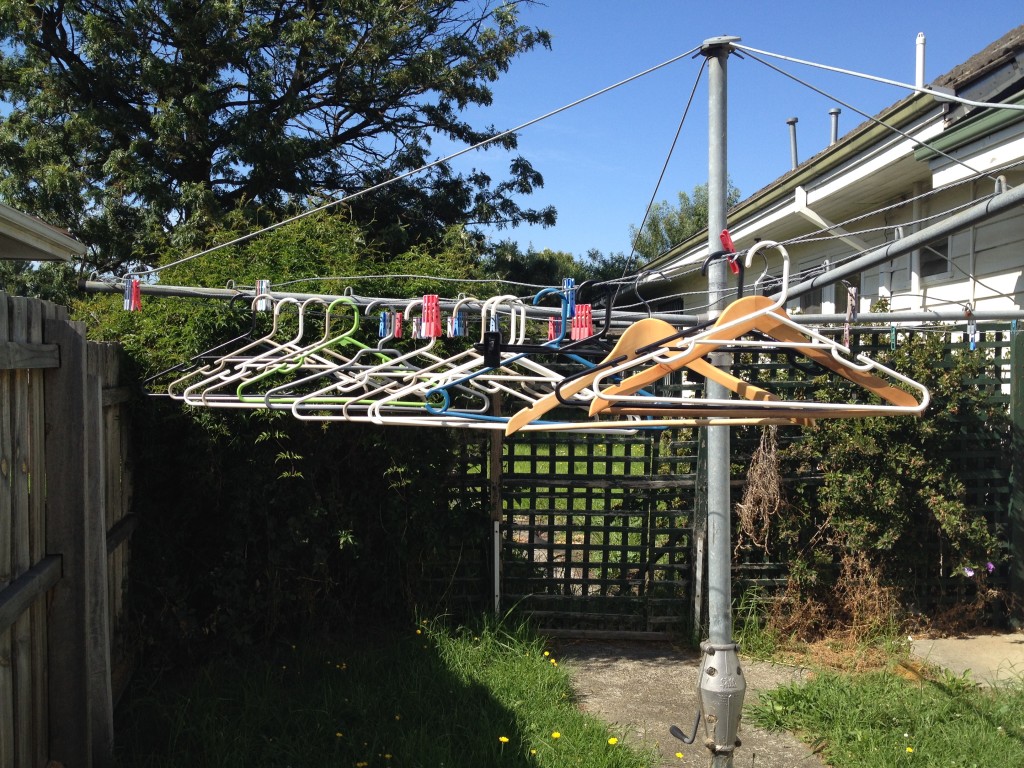 16 thoughts on “The joys of renting”